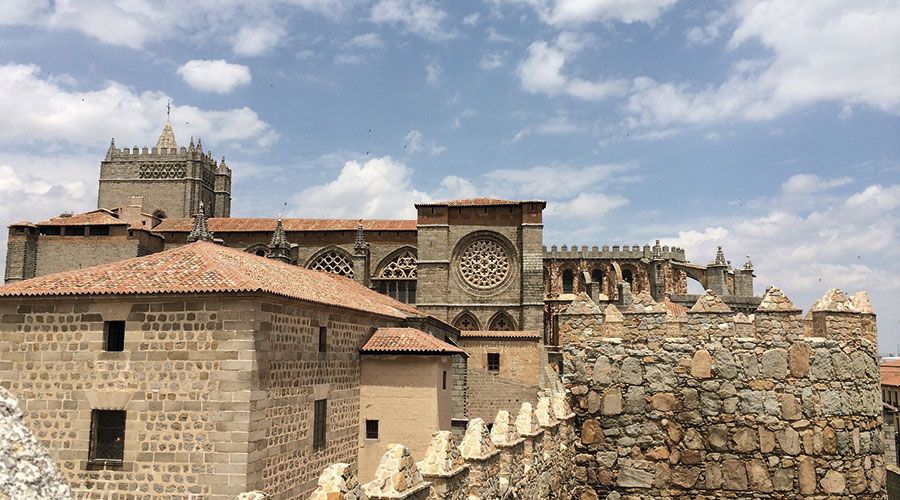 Trip to Segovia- Ávila. Leyends and some of its history.

On Saturday 14th January we started our trips for 2017 with a trip to Segovia, city which, just like Salamanca, forms part of the autonomous region of  Castile and León.

When arriving to Segovia, and before visiting the city, we took a stroll along the  Alameda, on the right bank of the river Eresma,  where we can see the ancient Real House of Currency (Casa de la Moneda) and the Monastery of St. Mª del Parral (Monasterio del Parral). The Alameda is a place chosen by many inhabitants of Segovia to practice sport, walk their dogs or just take a stroll.

Once we arrive in the city, we are able to contemplate its impressive aqueduct, one of the most conserved of all those built in the immense territory occupied by the Roman Empire. It was built at the beginning of the 2nd Century, and throughout many centuries it conveyed the water from the Sierra de Guadarrama to the city. For its construction, 20,000 granite blocks were used with any other type of cement. The aqueduct has 166 arches.

According to the popular tradition, it says that not the Romans built the aqueduct but the devil. The legend tells that a young servant from Segovia had to go and get water every day for the household she was serving, this work meant a lot of time and effort, and one day she was especially tired she said:” I would give my soul to the devil if I would not have to go for more water”. Suddenly, the devil appeared and asked her if she really meant it and the young woman, who did not think about the seriousness of her offer, told him she did. Then the devil promised to build an aqueduct to solver her problem in return for her soul.  Nevertheless the girl warned him that the aqueduct should be finished that same night. When she was alone, she thought it over again and realized the tremendous mistake she had made, the only thing left for her was to cry and pray asking God for help; God, when he say the sincere repentance of the young woman, made the sun go up earlier than normal, whereupon the devil who was about to put the last stone, was not able to finish the aqueduct on time.  That way the young servant saved her soul and nowadays we can all enjoy the aqueduct.

We took a walk through the Ancient Quarter and were able to admire its noble palaces and houses, its Romanic churches, its Cathedral and its Jewish Quarter. On many of the houses in Segovia we can see the typical decoration (esgrafiado): a typical decoration of Mudejar origin based on geometrical and plant themes. At the Plaza Mayor, in 1474, Isabel “la Católica” was crowned as Queen of Castile.

Of course, we made a stop to have lunch and taste some of the most famous dishes in Segovia: big beans of the Granja, piglet (cochinillo or tostón) and those who like something sweet the delicious ponche segoviano (cake).

In the picture you can see the statue the city of Segovia has dedicated the famous cook Cándido, Mesonero Mayor de Castilla, representing the famous ritual to “cut” the piglet with a dish, a way to proved that it has reached its correct cooking point and it is tender. After the dish is thrown on the ground and at the same time it breaks, some praises are said to the roasted piglet. This tradition is done with a dish, because on one occasion was not able to find any knifes and therefore he used a dish, creating a tradition repeated in many restaurants throughout the city.

In the afternoon we visited the fortress Alcázar: alcázar is a Word from Arabic origin which means castle or fortress.  During the Middle Ages the Kings of Castile loved to spend long periods: the Alcázar was the residence for twenty-two kings.

On the way home, we made a stop in Ávila, where we could admire its magnificent city walls and we remembered the figure of Santa Teresa de Jesús.

Both Ávila and Segovia are Cities declared World Heritage.

Even though it was cold, we spend a great day and to all of you we wish that 2017 will be year full of marvelous trips.