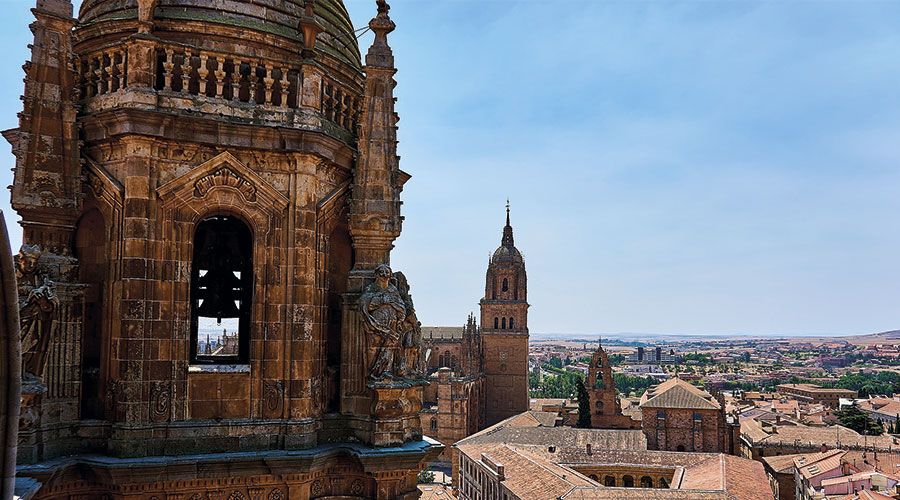 The Disantos- Culture and Traditions

A “disanto” is a religious festivity.

In Spain the month of February is one of the months that have more festive celebrations.  In this occasion we will focus on those which take place during the first week.  For the farmers, the weather during this month, especially during the first days, is very important, as it indicates what the hardest part of winter has already passed or will continue, which will determine, in part, the quality of the harvest.

The month starts with three festivities which combine aspects of Christianity with other of the cycle of nature.  The following saying also refers to these celebrations: “El primero brigidero, el segundo candelero, el tercero gargantero”.

– On the first we celebrate Santa Brígida (brigidero). During the night of the 31st January a curious ritual is done which is still preserved in some places: the youngsters peal the church bells  according to the rhythm of “Tente nube” (“Stop storm”), a spell which will liberate the village and its fields of the storms, especially the hail storms (piedra).

– On the second we celebrate La Candelaria (candelero), festivity dedicated to the Purification of the Virgin Mary and the Presentation of Jesus in the temple.  It is a “light” festivity (candles).  For some historians, the origin of this celebration can be found in the Ancient Rome, where the procession of the candles was part of the festivity of the “Lupercales”, and/or the Celtic world, where, during this time of the year, bonfires were made to honor the goddess Brigantia.

– On the third we celebrate San Blas, who, according to the legend, saved a child from dying when it was suffocating due to a fish bone stuck in his throat, and is therefore considered as the patron of any throat troubles (gargantero). In many places there is a tradition to bless the straps which people use as a necklace to protect one throughout the whole year of any diseases in their throats.  San Blas lived during the 3rd Century, he was a bishop and martyr.

Going back to the climatology during the month of February, one of the most popular proverbs in Spain is: “Por San Blas, la cigüeña verás y si no la vieres, año de nieves” and also: “Año de nieves, año de bienes” which refers to the benefits of snow for the fields.

The stork, a migratory bird, comes back from Africa when the hardest part of winter has passed, but if winter is especially cold, he will delay his return (“Si hiela por San Blas, treinta días más”).

– On the 5th we celebrate Santa Águeda (Sicily, 3rd Century), festivity with a great tradition in many places in Spain, but especially know for the one celebrated in Zamarramala (Segovia). Santa Águeda was a martyr and, among other terrible tortures, her breasts were cut, which converted her in the protector of all women and especially nursing mothers.

The most interesting of the celebration of Santa Águeda is that it is a festivity “which inverts the social order”, for many reminiscence of the ancient matriarchy, for others a connection to the solstice celebrations in Winter (Carnaval)).  On his part, Julio Caro Baroja relates this festivity with the Roman matronalia.

On the day of Santa Águeda women rule (las águedas) and, even though throughout the last years there has been a great progress in equality, this day continues to be to claim women’s rights: in many place, the mayor hands over his position to a “Águeda”, masses, banquets, dances are celebrated with only women.  Many put one for this occasion the typical clothes of their village or city.

Since 1227, Santa Águeda is celebrated in Zamarramala (Segovia) on the Sunday after the 5th of February: two “mayoresses” are elected, who will govern the village during two days.  After the procession and mass in honor of the Saint, the awards are announced: the “Matahombres de oro” (a gold pin is given to those persons or organizations who work in favor of women) and the “Home  bueno e leal” (title given to someone who or some organization which has shown interest for the village), the celebration ends burning a dummy, symbol of a man made fun of in popular songs and rimes.

– In the pictures: Stork and Mayoress of Zamarramala with the baton.